In South America, mate appears to have been used as an agent of pleasure for millennia. Pre-Columbian graves in the Andes region of Peru have yielded mate leaves. In northern Argentina, Indian graves containing silver mate drinking utensils have been discovered. The Guarani Indians used mate for shamanic purposes as well.

During the early colonial period, attempts were made to enslave the Indians. The Spanish kings, however, quickly forbade this practice, whereupon the Jesuits forced the Indians onto reservations and compelled them to establish maté plantations so that they could become a part of the cash economy. In commemoration of this “great achievement” of Christian charity, maté was first known by the name Jesuit tea.

In Argentina and Paraguay, non-Indians have also been cultivating maté trees since 1606. In Brazil, maté has been proclaimed the symbolic tree of Rio Grande do Sul.

The physician and botanist Aimé Bonpland (1773-1858) described the plant that was the source of maté in 1821. The plant received its valid botanical name the following year.

Many Indian legends portray the tree as one of the most important plants made by the god of creation. During the colonial period, the Spanish were of the opinion that Santo Tomé (Saint Thomas) had brought the tree and the drink to the Indians. The Guarani and Caingang venerated maté as a magical plant that enabled them to establish contact with the supernatural world. They believed that a spirit named Ka’a Yary lives in the maté tree and protects good, industrious workers but punished those who do not believe in plant souls.

Our Yerba Mate is higher quality because it’s freshly harvested by knowledgeable family farmers, as well as it’s stored in the cold and dark. It contains a high content of essential oils.

Our Yerba Mate is ethically harvested by local family farmers.

Be the first to review “Yerba Mate” Cancel reply 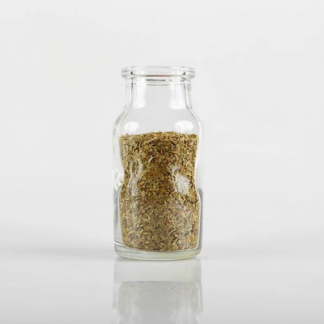