From ancient times the lotus has been a divine symbol in Asian traditions as a symbol of purity. Hindus revere it with the gods Vishnu, Brahma, and the goddesses Lakshmi and Sarasvati. Often used as an example of divine beauty, Vishnu is often described as the ‘Lotus-Eyed One’. Its unfolding petals suggest the expansion of the soul. The growth of its pure beauty from the mud of its origin holds a benign spiritual promise. Particularly Brahma and Lakshmi, the divinities of potency and wealth, have the lotus symbol associated with them. In Hindu iconography, deities often are depicted with lotus flowers as their seats.

Borrowing from Hinduism, in Buddhist symbolism the lotus again represents the purity of the body, speech, and mind as if floating above the muddy waters of attachment and desire. It is also to be noted that most Buddhist, Chinese, Hindu, Japanese, amongst other Asian deities, are often are depicted as seated on a lotus flower. According to legend, Gautama Buddha was born with the ability to walk and everywhere he stepped, lotus flowers bloomed. Drawing in turn on these beliefs, the international Bahá’í community adopted this symbolism in the design of the Lotus Temple in New Delhi, India. 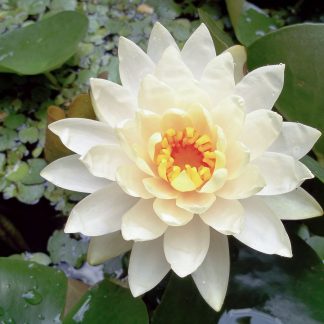