Distribution: Native to Europe and Asia. Introduced in North America.

Valerian is an old Germanic ritual and healing plant. It was sacred to the goddess Hertha, who rode upon the red deer. Wieland, the shamanic smith of the Germanic mythological worlds, used the root to heal diseases. For this reason, valerian was also known as velandswurt, “Wieland’s root”. In earlier times, valerian was hung on houses as a protection against witches and witchcraft, evil spirits, and devils. The root was also used to keep away the devil. In the early period, valerian root was regarded as an aphrodisiac and was used to treat the “sacred disease” (epilepsy). It was also known as theriac root, for it was an important ingredient in the panacea theriac.

Valerian has been used as a medicinal herb since at least the time of ancient Greece and Rome. Hippocrates described its properties, and Galen later prescribed it as a remedy for insomnia. In medieval Sweden, it was sometimes placed in the wedding clothes of the groom to ward off the “envy” of the elves.

Our Valerian is of higher quality because it’s freshly harvested by knowledgeable family farmers, as well as it’s stored in the cold and dark. It contains a high content of essential oils.

Our Valerian is ethically harvested by local family farmers.

Be the first to review “Valerian Root Powder” Cancel reply 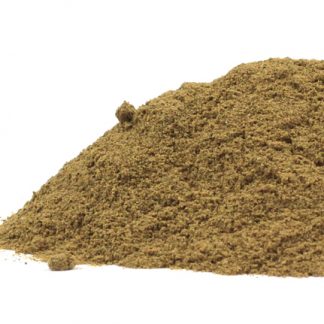