Tagetes lucida Cav. is a perennial plant native to Mexico and Central America. It is used as a medicinal plant and as a culinary herb. The leaves have a tarragon-like flavor, with hints of anise, and it has entered the nursery trade in North America as a tarragon substitute. Common names include sweetscented marigold, Mexican marigold, Mexican mint marigold, Mexican tarragon, sweet mace, Texas tarragon, pericón, yerbaniz, and hierbanís.

Tagetes lucida was used by the Aztecs in a ritual incense known as Yauhtli, as well as being dedicated to the rain god Tlāloc. Tagetes lucida is still in use today primarily as a tea to treat the common cold, intestinal gas and diarrhea.

Tagetes lucida also had many culinary uses by the Aztecs including as one of the ingredients added to make the drink chocolatl, which gave it a spicy flavor. Fresh or dried leaves are also used as a tarragon substitute for flavoring soups and sauces. A pleasant anise-flavored tea is brewed using the dried leaves and flower heads. This is primarily used medicinally in Mexico and Central America.

A yellow dye can also be obtained from the flowers, and when the plant is dried and burnt, it is used as an incense and to repel insects.

Be the first to review “Tagetes Lucida” Cancel reply 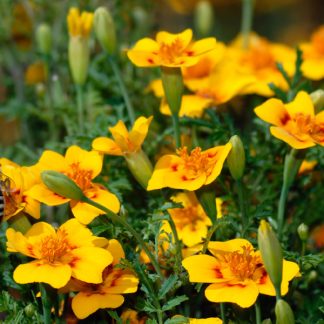