Scutellaria is a genus of flowering plants in the mint family, Lamiaceae. They are known commonly as skullcaps. The generic name is derived from the Latin scutella, meaning “a small dish, tray or platter”, or “little dish”, referring to the shape of the calyx. The common name alludes to the resemblance of the same structure to “miniature medieval helmets”. The genus has a subcosmopolitan distribution, with species occurring nearly worldwide, mainly in temperate regions.

Skullcaps are common herbal remedies in systems of traditional medicine. In traditional Chinese medicine they are utilized to “clear away the heat-evil and expel superficial evils”. Scutellaria baicalensis in particular is a common component of many preparations.Its root, known as Radix Scutellariae, is the source of the Chinese medicine Huang Qin. It has been in use for over 2000 years as a remedy for such conditions as hepatitis, diarrhea, and inflammation. It is still in demand today, and marketed in volumes that have led to the overexploitation of the wild plant. Its rarity has led to an increase in price, and encouraged the adulteration of the product with other species of Scutellaria.

In North America, Scutellaria lateriflora was used in Native American medicine to treat gynaecological conditions. It became a common treatment in America for rabies.

Be the first to review “Skullcap” Cancel reply 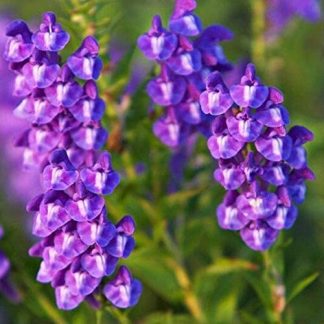