Other names: Red water lily, Red Lily of the Nile

Blue, Pink, Red and White water lilies were the most important cultivated ritual plant of ancient Egypt. They grew wild in ponds and in the lowlands of the Nile and were planted in all-natural and artificial bodies of water. They were esteemed for their beauty, their enchanting hyacinth-like scent, and their symbolism. The buds and flowers were popular head and hair ornaments. Both the living and the dead were festooned with garlands made from the plant. The garlands in the grave of the great pharaoh Ramses II (1290-1223 B.C.E.) were almost entirely of white and blue lotus. The Egyptian lotus was described by Dioscorides, who was certainly aware of the blue lotus as well.

Azru, is an Egyptian mummy donated to the Manchester Museum in England, in 1825. Living on the Nile, in 2700 B.C, Azru was royalty, a noblewoman of Thebes, later called Luxor, a former capital of Egypt, a chantress at Khonsu – the moon god was the son of Amon and Mut. The main temple at Karnak is dedicated to him. Three times a day she would bring food and wine with blue lotus tincture or extract, fetch garments for the gods, priests, and Pharaoh, and dance and sing for the royal court. She had wealth, and her own home and servants, where she stayed until scheduled or called to the temple.

Our Red Water Lily is of higher quality because it’s freshly harvested by knowledgeable family farmers, as well as it’s stored in the cold and dark. It contains a high content of essential oils.

Our Red Water Lily is sold for incense or soap making, for decorative purposes and/or for legitimate ethnobotanical research and is not intended for human consumption. By ordering, you automatically agree to our terms and conditions. The information given here is for academic purposes only and not intended to be used medically.

Be the first to review “Red Water Lily” Cancel reply 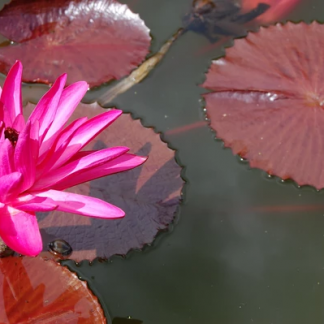