Folin Reagent is primarily useful for detecting a class of drugs called piperazines, such as BZP and TFMPP. Contains two bottles. To help with identification it is useful to put a blank drop on the plate next to the drop you put on your drug sample. This makes it easier to compare the color changes. Contains enough reagent for 50-75 tests.

General Testing Instructions
Folin reagent actually consists of two reagents in two, separate bottles, marked “A” and “B”. Bottle “A” has a turquoise label, and bottle “B” has a green label.

IMPORTANT: This test is to be used only after you have first tested your sample with Marquis, Mecke, or Mandelin reagent. It should never be used alone.

IMPORTANT: Never have more than one reagent bottle open at a time. If you mix up the caps and put the wrong cap on the wrong reagent bottle, this may cross-contaminate the reagents and ruin them. Be sure to perform the tests in a well-lit location.

Scrape a tiny bit of your pill or powder onto a large, white ceramic plate. Use just enough powder to see on the plate.
Take reagent bottle “A” (the turquoise label) out of its plastic safety container. Remove the cap and turn the bottle upside-down a couple of inches over the powder.

Squeeze one drop out of the bottle onto the powder. Be careful to not let the dropper bottle touch your powder or you will contaminate and ruin the rest of the reagent. Replace the cap. (Note: The reagent in bottle “A” may have either a yellowish or a light orange tint. This is normal. It is only after the second solution “B” is mixed with the first that the color change will start.)

Take reagent bottle “B” (the green label) out of its plastic safety container, remove the cap and add a drop of the solution into the same powder/liquid already on the plate from step 2. Replace the cap and put the bottle back into its safety container.
Observe the color change right away. Use the Folin column of the color chart included with your kit to evaluate your test. 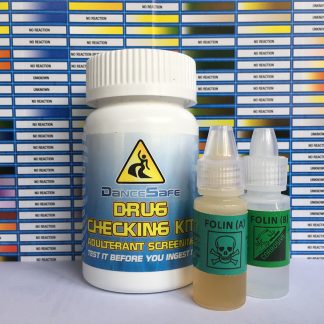