In 1569, Nicolas Monardes, a Spanish doctor In Peru, was the first to document the use of this holistic solution you’ve been looking for today; A Passionflower, a name originating from a biblical background, is a variety of exotic vine flowers with curly purple or blue tentacle-like petals, growing throughout South America.

The extract is made by drying out the plant and grounding it into powder, making it a concentrated form of the phytochemicals and volatile compounds. Not only is its extract tasty and cost-effective, but also rich in the history of traditional medicine.

Introduced via American homeopathy, During the First World War, it was used as a nerve sedative to treat shell shock. Passionflower remains a steadfast choice of traditional herbalists for its ability to gently restore debilitated nerve centres by promoting nutrition uptake at the cellular level. Native Americans used the root in poultice preparation for boils, cuts, earaches, and inflammation.

Passion Flower is a holistic extract of the highest quality nature has to offer. It is a woody vine that has unusual blossoms. A flower is a climbing vine renowned for its beautiful white flowers with purple, blue, or pink calyx crown blooms. Coming towards the name, this beautiful name has meaning on a deeper level. People were enthralled with the uniqueness of this plant and felt that it was representative of something greater. The name of this plant comes from a biblical place. The mystery of such a beautiful blossom emerging from an unassuming bud has been compared to the Passion of Christ Roman Catholic priests of the late 1500s named it for the Passion (suffering and death) of Jesus Christ. It was believed that several parts of the plant, including the petals, rays, and sepals, symbolized features of the Passion.
In the 16th Century, Christian Missionaries in South America named the flower (Passiflora spp) because they saw it as a symbol of Jesus Christ’s death. It was the first flower they saw on their journey and considered it a good sign.

The Spanish conquerors who invaded Mexico and Peru in the 16th century saw various symbols of the Passion of Christ in the flowers of the vine. In Christian tradition, this refers to the time between the Last Supper and the death of Christ. In the Spaniard’s elaborate analogy;it is believed that the crown at the centre of the flower is similar to the crown of thorns worn by Jesus during his crucifixion. The beard of the flower symbolizes the whip, the five stamens represent the wounds of Christ, the total number of petals corresponds to 10 faithful apostles (Peter and Judas are not cut), etc. Although there are more than 400 species of passionflower, the species used for medicinal purposes is called incarnate, which can be translated as “embodied”.

The plant is native to the southern United States, India, and the West Indies, although passionflower also grows in Mexico, Central America, and South America. Only plant parts that are fresh and dried on the ground can be used as preparations.

Passion fruit has been grown as a semi-domesticated crop by the Aztecs, Incas & other South American Native Indians for thousands of years. Passiflora was first classified by Linnaeus in 1745 when he recognized 22 species. There are now thought to be over 600, but many are under threat in their natural rainforest habitat. Hybrids were first produced in the UK in the 1820s – the first one, P. x violacea, although its correct name is disputed, is still with us.

The passion flower plant is the richest plant of nature, which contains one of the widest varieties of volatile phytochemicals in the plant kingdom, with high levels of organic acids. This makes the plant valuable as a medicinal product. Passion flower is a plant that has played a vital role in modern history and has made appearances in a variety of different cultures.
The passionflower was well known to the natives of South American as a herbal remedy.

The plant was also often used in Brazilian medicinal folklore. The passionflower was discovered by the Spanish doctor, Monardes in Peru in 1569. Forty years later, it was introduced to Europe as an ornamental plant, for, long before the passionflower was included in Europe’s treasury of medicinal plants, botanists were fascinated by this climber’s inflorescence. In his book De florum cultura, published in 1633, the Jesuit Ferrari saw in the various parts of the flower all the instruments of the Passion of Jesus Christ.

First used by Native Americans and the Aztecs of Mexico as a sedative, passionflower has been a popular folk remedy for centuries in Europe and North America. Other names for passionflower include maypop, granadilla, passion vine, and apricot vine.

In North America, the passionflower is known as maypop. It was valued by Native Americans, mainly for its ability to heal bruises and wounds. The Houma tribe in Louisiana used the herb as a blood tonic, while the Mayans used the crushed plant to help reduce inflammation. Infusions of the pounded roots were used to wean babies and as drops for ear infections. It was first described by a European botanist in the 1780s and, by the 19th century, had joined the herbal repertoire, initially as a remedy for epilepsy. As time went on, herbal practitioners started to value the plant for its calming, sedative and pain-relieving actions. Over the years, it has been used to help relieve anxiety, stress, fatigue, insomnia, muscle spasms, seizures, hysteria and hyperactivity in children.

The German Commission E, considered an authoritative source of information on alternative remedies, reported that passion flower appears to reduce restlessness in animals. In a 1988 study involving rats that was published in a German journal of pharmacology, passionflower was shown to prolong sleep, reduce motor activity, and protect the rodents from convulsions.
Native Americans used the root in poultice preparation for boils, cuts, earaches, and inflammation. Typically, the aerial parts are the most commonly used medicinally. The passionflower fruit is edible with a pleasant sweet flavour and is high in niacin (vitamin B3). It’s commonly used to make jams or jellies. The young leaves and buds are also commonly prepared and eaten as vegetables, and sometimes the flowers are made into syrup. A delicious and medicinal treat!

The passion flower plant is a very gentle flower that not only helps promote relaxation, but also helps to revitalize and restore the body. It is a nourishing plant for the nerves so that while it is helping the body to relax it is also building the body up so that it will be able to support itself soon.In Flower Essence Therapy, Passionflower is indicated for those who need to soften and open up to love, especially when a withdrawal is caused by hypersensitivity. In Homeopathy, its main indication is for nervous troubles that are the result of over-exhaustion and depletion of vital force.

MILK SUGAR LEMON MINT
NO NO NO NO
IDEAL BREWING TEMPERATURE: 100ºC/212ºF
HOT BREWING METHOD:
Bring filtered or freshly drawn cold water to a rolling boil. Place 1 slightly heaping teaspoon of loose tea for each 7-9oz / 200-260ml of fluid volume in the teapot. Pour the boiling water into the teapot. Cover and let steep for 3-7 minutes according to taste (the longer the steeping time the stronger the tea).
ICED TEA BREWING METHOD (Pitcher): (To Make 1 Liter/Quart):
Place 6 slightly heaping teaspoons or 6 tea bags into a teapot or heat-resistant pitcher. Using filtered or freshly drawn cold water, boil and pour 1¼ cups/315ml into the pot. Steep for 5 minutes. Quarter fills a serving pitcher with cold water. Pour the tea into your serving pitcher, straining the leaves or removing the tea bags. Add ice and top-up the pitcher with cold water. Garnish and sweeten to taste. A rule of thumb when preparing fresh brewed iced tea is to increase the strength of hot tea, since it will be poured over ice and diluted with cold water. (Note: Some luxury quality teas may turn cloudy when poured over ice. This is a sign of luxury quality and nothing to worry about.)

ICED TEA BREWING METHOD (Individual Serving):
Place 1 slightly heaping teaspoon or 1 tea bag into a teapot for each serving required. Using filtered or freshly drawn cold water, boil and pour 6-7oz/170-200ml per serving into the pot. Cover and let steep for 5 minutes. Add hot tea to a 12oz/375ml acrylic glass filled with ice, straining the leaves or removing the tea bags. Not all of the tea will fit, allowing for approximately an additional ½ serving. Sweeten and/or add lemon to taste. A rule of thumb when preparing fresh brewed iced tea is to increase the strength of hot tea since it will be poured over ice and diluted. (Note: Some luxury quality teas may turn cloudy when poured over ice. This is a sign of luxury quality and nothing to worry about!)

Be the first to review “Passion Flower” Cancel reply 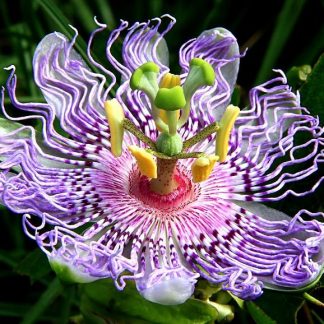