LSD - The Wonder Child: The Golden Age Of Psychedelic Research In The 1950s

LSD – The Wonder Child: The Golden Age Of Psychedelic Research In The 1950s

• Reveals how intellectuals, philosophers, artists, and mystics of the 1950s used LSD to bring ancient rites into the modern ageExploring the initial stages of psychedelic study in Europe and America, Thomas Hatsis offers a full history of the psychedelic-fueled revolution in healing and consciousness expansion that blossomed in the 1950s–the first “golden age” of psychedelic research.

Revealing LSD as a “wonder child” rather than Albert Hofmann’s infamous “problem child,” the author focuses on the extensive studies with LSD that took place in the ’50s. He explores the different groups–from research labs to the military to bohemian art circles–who were seeking how best to utilize LSD and other promising psychedelics like mescaline. Sharing the details of many primary source medical reports, the author examines how doctors saw LSD as a tool to gain access to the minds of schizophrenics and thus better understand the causes of mental illness.The author also looks at how the CIA believed LSD could be turned into a powerful mind-control weapon, including a full account of the notorious top-secret program MKUltra.

Reintroducing forgotten scientists like Robert Hyde, the first American to take LSD, and parapsychologist Rosalind Heywood, who believed LSD and mescaline opened doors to mystical and psychic abilities, the author also discusses how the infl uences of Central American mushroom ceremonies and peyote rites crossbred with experimental Western mysticism during the 1950s, turning LSD from a possible madness mimicker or mind weapon into a sacramental medicine. Finally, he explores how philosophers, parapsychologists, and mystics sought to use LSD to usher in a new age of human awareness.

Be the first to review “LSD – The Wonder Child: The Golden Age Of Psychedelic Research In The 1950s” Cancel reply 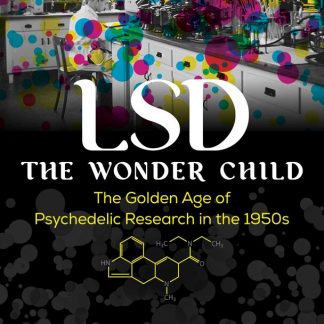