Lemon balm (Melissa officinalis), balm, common balm, or balm mint, is a perennial herbaceous plant in the mint family Lamiaceae and native to south-central Europe, the Mediterranean Basin, Iran, and Central Asia, but now naturalized in the Americas and elsewhere.

It grows to a maximum height of 70–150 cm (28–59 in). The leaves have a mild lemon scent similar to mint. During summer, small white flowers full of nectar appear. It is not to be confused with bee balm (genus Monarda), although the white flowers attract bees, hence the genus Melissa (Greek for “honey bee”).

The leaves are used as a herb, in teas, and also as a flavouring. The plant is used to attract bees for honey production. It is grown as an ornamental plant and for its oil (to use in perfumery). The tea of lemon balm, the essential oil, and the extract are used in traditional and alternative medicine, including aromatherapy. The plant has been cultivated at least since the 16th century, but research is still being conducted to establish the safety and effects of lemon balm. 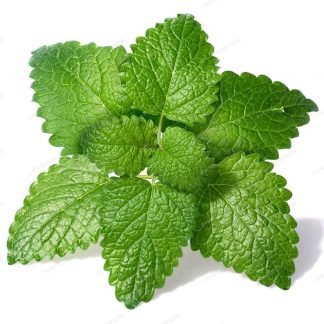