Lavandula (common name lavender) is a genus of 47 known species of flowering plants in the mint family, Lamiaceae. It is native to the Old World and is found in Cape Verde and the Canary Islands, and from Europe across to northern and eastern Africa, the Mediterranean, southwest Asia to southeast India.

Many members of the genus are cultivated extensively in temperate climates as ornamental plants for garden and landscape use, for use as culinary herbs, and also commercially for the extraction of essential oils. The most widely cultivated species, Lavandula angustifolia, is often referred to as lavender, and there is a color named for the shade of the flowers of this species.

The ancient Greeks called the lavender herb νάρδος : nárdos, Latinized as nardus, after the Syrian city of Naarda (possibly the modern town of Dohuk, Iraq). It was also commonly called nard. The species originally grown was L. stoechas. During Roman times, flowers were sold for 100 denarii per pound, which was about the same as a month’s wages for a farm laborer, or fifty haircuts from the local barber. Its late Latin name was lavandārius, from lavanda (things to be washed), from the verb lavāre (to wash).

Spanish nard (Old French: “spykenard de spayn le pays”), referring to L. stoechas, is listed as an ingredient in making a spiced wine, namely Hippocras, in The Forme of Cury. Lavender was introduced into England in the 1600s. It is said that Queen Elizabeth prized a lavender conserve (jam) at her table, so lavender was produced as a jam at that time, as well as used in teas both medicinally and for its taste.

Lavender was not used in traditional southern French cooking at the turn of the 20th century. It does not appear at all in the best-known compendium of Provençal cooking, J.-B. Reboul’s Cuisinière Provençale. French lambs have been allowed to graze on lavender as it is alleged to make their meat more tender and fragrant. In the 1970s, a blend of herbs called herbes de Provence was invented by spice wholesalers. Culinary lavender is added to the mixture in the North American version. Today, lavender recipes are in use in most parts of the world.

Be the first to review “Lavender Flower – Lavandula” Cancel reply 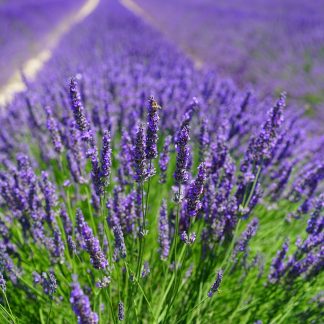