Labrador Tea is named after the swamps of Greenland and Labrador, where it grows in profusion. During the American Revolution, it was one of the several herbs used as a pleasant-tasting substitute for commercial tea. Germans once added the leaves to their beer to make it more intoxicating. Medical literature gives full credit to Labrador tea use in folk medicine, though it has been rarely studied clinically.

Labrador Tea was presumably used as a tonic by First Nations people in North America. It is thought that it was the Europeans who introduced the idea of using the plant more commonly as a tea. In the fur-trading era, the French Canadian “coureurs-des-bois” used Labrador tea to extend their supplies of black tea. The leaves and the flowers are both reported to have been used for tea, either fresh or dried, and the leaves can be picked all year.

The leaves have been traditionally used as an expectorant, pectoral, diuretic, galactagogue and sudorific. It is useful in coughs, dyspepsia, and irritation of the membranes of the chest. An infusion has been used to soothe irritation in infectious, feverish eruptions, in dysentery, leprosy, itch, etc. The leaves are also used in malignant and inflamed sore throat.Moreover, Labrador tea is said to have sedative and slightly narcotic properties in some people. The plant contains tannins that promote healing. Thanks to its astringent and pectoral properties, its infusion is considered to be effective against broncho-pulmonary conditions. Finally, it is also known to have digestive and emmenagogue properties (properties favoring menstrual cycles).

Our Labrador Tea is higher quality because it’s freshly harvested by knowledgeable family farmers, as well as it’s stored in the cold and dark. It contains a high content of essential oils.

Our Labrador Tea is ethically harvested by local family farmers.

Be the first to review “Labrador Tea” Cancel reply 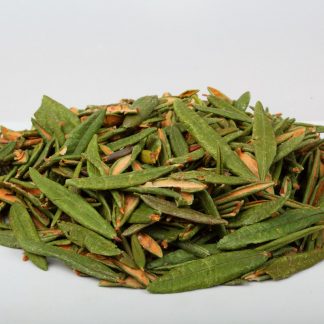