In India, it is revered as a holy flower, used in daily puja rituals. The flowers of this vine were imagined to have the shape of human female genitals, hence the Latin name of the genus “Clitoria”, from “clitoris”. The species name is thought to derive from the island of Ternate in the Indonesian archipelago, from where Linnaeus’s specimens originated.

It is grown as an ornamental plant and as a revegetation species (e.g., in coal mines in Australia), requiring little care when cultivated. As a legume, its roots form a symbiotic association with soil bacteria known as rhizobia, which transform atmospheric N2 into a plant-usable form (a process called nitrogen fixing), therefore, this plant is also used to improve soil quality through the decomposition of nitrogen rich plant material.

In Southeast Asia, the flower is used as a natural food colouring to colour glutinous rice and desserts like the Eurasian putugal. In Kelantan, in the north-east of peninsular Malaysia, it is an important ingredient in nasi kerabu, giving it its characteristic bluish colour. In Burmese and Thai cuisines, the flowers are also dipped in batter and fried.

Butterfly pea flower tea is made from the ternatea flowers and dried lemongrass and changes color depending on what is added to the liquid, with lemon juice turning it purple. In Thailand and Vietnam, this butterfly blue pea flower tea is commonly mixed with honey and lemon to increase acidity and turn the beverage a pink-purple color, to produce for a drink usually served after dinner, or as a refreshment at hotels and spas. The drink is a typical local drink like chamomile tea is in other parts of the world. The tea is found in both hot and cold varietie

The flowers have more recently been used in a color-changing gin. Blue in the bottle, it turns pink when mixed with a carbonated mixer such as tonic waterdue to the change in pH. As organic colours are not permanent, this type of gin is recommended to be stored in a dark place to maintain the effect.

In traditional Ayurvedic medicine, it is ascribed various qualities including memory enhancing, nootropic, antistress, anxiolytic, antidepressant, anticonvulsant, tranquilizing, and sedative properties. In traditional Chinese medicine, the plant has been ascribed properties affecting female libido due to its similar appearance to the female reproductive organ.

The flower can be used to dye natural fibers and is used by traditional societies in Asia to do so. 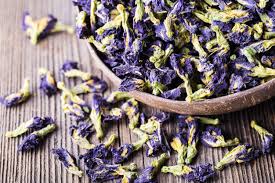