Wormwood and its qualities were already well known in ancient times. This and other species of Artemisia were sacred to the Greek goddess Artemis; hence their name. However, it is uncertain whether the early sources used the Greek name absinthion as a catch-all term for a number of Artemisia species or even other plants (asters).

In ancient times, the name Artemisia (which was derived from that of the goddess Artemis, the sister of Apollo and the god of healing) was primarily used to refer to wormwood, mugwort, and related species. Unfortunately, very few ancient texts have come to us that are able to cast light upon the connection between these plants and the virgin goddess. The Greek word Artemisia means “intactness”, a clear reference to the chasteness of the goddess, who, as the mistress of wild animals, functions as a mixture of Amazon, witch, and shamaness. In ancient Greece, Artemis was revered as the patron goddess or virgins. In the ancient Orient, she was regarded as the ruler of the Amazons. During the Italian renaissance, she became Diana, the witch goddess. In spring, during the time of the full moon, ecstatic and orgiastic Artemis festivals were held to honor the goddess. As part of these festivities, the goddess was symbolically consumed in the form of wormwood and mugwort.

Our Absinthe is higher quality because it’s freshly harvested by knowledgeable family farmers, as well as it’s stored in the cold and dark. It contains a high content of essential oils.

Our Absinthe is ethically harvested by local family farmers. 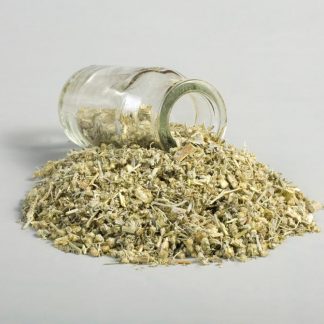